Skip to content
CareersDiversity and inclusion Maria Kreß | My job has nothing to do with my wheelchair
17 June 2019 ... min. read Listen
Listen

My job has nothing to do with my wheelchair 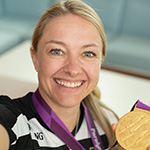 Paralympic champion - Maria Kreß works in HR at ING in Germany. She’s married with a three-year-old daughter. Maria won gold with the German wheelchair basketball team at the 2012 Paralympics in London.

After high school, I spent a year as an au pair in the US. I was still young, wanted to explore the world. At the end of that year, while travelling with some friends to the West Coast, I fell from a horse and broke my back. It was a bad fall. I was left paralysed from my waist down.

I was only 20, and my first thought was: my life is over. I returned to Germany and moved back in with my parents. In the beginning, I couldn’t dress myself, I couldn’t shower. I felt like a baby. In rehab, I learnt how to do all these things for myself again.

People who’d been in a wheelchair for a long time told me I’d get used to it. Step by step I got to know my body again. It’s just a matter of doing things differently. I’m not the sort of person that wants to depend on other people. My parents raised me to be an independent woman, and the wheelchair made that feeling even stronger.

At some point after the accident, I started looking for a sport to do. I met someone who told me about wheelchair basketball. I had always been lousy at ball games, but he convinced me to try it. And I liked it. The more I practiced, the better I got. Then the coach of the German national team invited me to play with them. It was incredible and unbelievable at the same time.

Then came 2012, the year when my whole life changed. First, it was the year of the Paralympic Games in London. I’d been practicing so hard for this, and suddenly there I was, at the Games! It was like a movie. Our team just got better from game to game. We made it to the finals against Australia, and we won 58-44. Of all the girls in the team, I cried the most!

The four years before the Games, I had totally neglected all the other things in my life. My family, my friends, my ex-boyfriend. Then in London, I met another basketball player and we fell in love. He’s also handicapped, but can walk short distances. We got married and have a little girl of three. We live in our own house. We like travelling. We’ve been to Thailand, Bali, Australia, the US and now we’re planning a trip to Sri Lanka. It requires more planning, but we don’t let anything stop us.

Also in 2012, I applied to work at ING. I was very open about being in a wheelchair. In the interview I stressed that I want to be able to move around independently, that I need an elevator and a big bathroom. It was all fine. ING is very open-minded, they see diversity as a good thing.

It took a while for my colleagues to get used to my situation. First they offered to help me all the time, and when I said no I thought they might feel offended. But it’s about being independent. When I need help, I will tell you. Now everybody knows this. I’m very proud of my work, being responsible for more than 60 trainees and dual students. And isn’t that quite cool, to be a role model for so many people?

It’s only with people who don’t know me, that I sometimes feel different. I know they don’t mean it that way, but some people start talking down at me as if I’m a child. We’re literally not on the same level. My strategy is to just be myself, and show them that my job has nothing to do with my wheelchair.