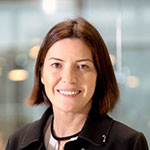 Pinar Abay is a member of ING’s Management Board Banking. Growing up in Turkey, she learned to fight what was expected of her from an early age. It allowed her to carve a future on her own terms.

That’s the story of my life. If someone says something isn’t possible, I want to give it a try.

Empowering women is close to my heart. It’s because I’ve been through the challenges of being a woman and a leader, and I’ve been lucky to overcome some of those challenges. So I want to create awareness on how other women can find their way and gain equal rights – whether in their personal or professional lives.

I learned to fight what was expected of me already as an 8-year-old girl. For example, when I was growing up, it wasn’t appreciated for girls to play certain sports, like football. I always loved to play outside with other kids, and I loved to play football, but my father didn’t want me to. So I secretly created a girls football team in my neighborhood with other girls who also weren’t allowed to play.

I also wanted to play on the basketball team at school, which my father didn’t like either. He warned me: if I play basketball, no man will be interested in me and I’ll never get married, as he believed I would be a too tall for a girl. That’s why I’m a big supporter of girls in sports – and it’s not a coincidence that after I became CEO of ING in Turkey, we sponsored girls basketball and girls with Olympic dreams.

I was encouraged to study, but also expected to be a good housewife afterwards. And I wasn’t allowed to study in Istanbul – that was too far away for a girl from Ankara. But immediately after I finished school, I left the city where I grew up!

The outlier in the room

When I finished university, I ended up going as far away as possible: to Silicon Valley, where I worked for McKinsey.

Silicon Valley was a very male-dominated, techy population and I also had to find my place as a woman there. I was surrounded by engineers and didn’t understand 80% of the conversations. It was daunting and I felt alone. I thought, “How I am going to survive?”

But I realised that you need to find joy in your minority position. So I started to enjoy being the outlier in the room, asking questions, challenging those around me. Being different from the others gave me a lot of freedom.

Years later, when I worked in New York, I also had to find ways to adjust to a new situation. I was pregnant with my first child and working long hours, with little sleep. But I was lucky that there were a few amazing men at McKinsey, men more senior than me, who coached me on how to combine a heavy career and motherhood.

One thing they taught me was to pace your life. They told me: the fact that you’re having a child means you may do things a bit differently at work for a while. That’s OK, because you have other priorities in your life right now. And the moment you rebalance your life, there will still be opportunities for you.

At a place where there was constant pressure for high performance, the fact that senior people were encouraging me to slow down my schedule gave me so much confidence. And now I’m in my current position, I have the same message for people in my teams. Yes, I can be demanding, but I also know sometimes there are other priorities in life.

The courage to try

In 2011, I returned to Turkey. I was 34 and had been asked to become CEO of ING there. Many people told me I couldn’t do it – because I had two kids and wouldn’t be able to commit enough time to the job, or because ING in Turkey was back then a conservative bank with a lot of hierarchies.

But I thought to myself: if I don’t try, I’ll regret it. And if I do fail, at least I had the courage to try.

And that’s the story of my life. If someone says something isn’t possible, I want to give it a try. My purpose in life is ‘try the impossible’.

The fact that someone like me, who had never run a bank before, could become the CEO of a Turkish bank with 6,000 employees, also says a lot about the ING culture. It shows that ING is open to people from diverse backgrounds and gives people a chance.

Express who you are

One piece of advice I give to women who are their first management role is: don’t forget you’re a woman. Being a woman is part of our identity. And I’m not going to change my identity for any institution or any professional career or anyone. Express who you are, because that’s freedom and that freedom will make you happy in your job. That applies not only to gender, by the way, but to all kinds of diversity.

As a woman with a diverse background in the board room, I bring a different perspective. One of the things I find important is considering both the head and the heart. It’s not just about the decisions we make; how we feel about our decisions is also important. How would people feel if we did that? How would we feel as an organisation? How would we feel as a team? In the past, when I asked those kinds of questions, people would look at me strangely. But they are very important questions.

And that’s what diversity really comes down to: a richness of ideas, which brings an unimaginable richness of debate. I really love it. I’m proud of all the nationalities and cultures we have in my management team. And I want ING to become a magnet for talent from around the world. People should bring their talent and just be themselves here.

Pinar in 2018 during a visit to Agri, a town in the east of Turkey, where ING supported a local school project. The children "shared their dreams for the future in this video.

The campaign theme for the 2021 International Women’s Day is ‘Choose to Challenge’ — because change comes when you challenge the status quo. Pinar’s message for women everywhere in the world? “I would increase the education of girls in science and technology. Many girls are reluctant to go into those fields. In the next 50 years there will be many more jobs in engineering, data science, genetics, etc. I really care about better employment opportunities for women. For that to happen, we simply need more girls to study those subjects.”