Skip to content
CareersDiversity and inclusion Your whole self: Silvia | The gift of a cultural background
26 August 2020 ... min. read Listen
Listen

The gift of a cultural background 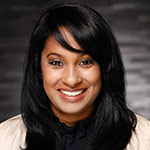 Silvia Hossain-Mucha is a customer journey expert at ING in Germany. She joined ING in 2016 after working in Myanmar for several years. The daughter of Bengali parents, Silvia was born and raised in Germany and considers her dual cultural identity a gift.

My parents taught me there is more than rice.

My parents, who had come to Germany from Bangladesh, were still learning German when I was born. I have a Bengali and a German first name. When I went to kindergarten and the other children asked me what my name was, I said ‘Silvia’, which is my second name. At elementary school, the same question came up again. I didn’t want to be different. My Bengali first name is Sharmin.

In my town near Frankfurt and at school, I never experienced any racism or strange comments. I consider myself very lucky.

At some point, though, there were some things that were difficult for me to understand. For example, why did we always eat rice at home? I always liked to go to my friend’s house after school and eat lunch there because her mom would make fish sticks with potato salad or mashed potatoes. I loved it! And still do.

Coming from a different culture sometimes caused some embarrassing situations for me. In Bangladesh, when you speak to an older person, you never use their names. So my younger sister always called me Apu (‘sister’) instead of Silvia. When my friends called me at home and my little sister picked up the phone, she would say, “Apu, Apu! Telephone for you.” My friends would hear that. Eventually I told my sister not to call me Apu anymore. Today, I miss being called Apu. It’s nice to be called ‘Sister’. It makes me feel closer to the Bengali culture. Today I know it wasn’t something to be embarrassed about at all.

I’ve always considered myself part Bengali and part German, so when an opportunity came up in a previous job to work on a project in Myanmar, I was interested. After all, I was already open to other cultures and knew how people there think. But in Myanmar, the German side of me was very dominant.

When the German embassy in Myanmar organized an Oktoberfest, I first thought: Who needs an Oktoberfest in Rangoon? But that was a moment when I really felt German. I even wore a dirndl, although I had never been to an Oktoberfest while living in Germany. A year later, I was even helping to organize the Oktoberfest.

Because of my cultural background, I’m maybe more sensitive to other people and can easily put myself in other people’s shoes. The great thing is that I can pick the positive and useful aspects of both cultures depending on the situation.

I cherish both of my cultures and today I see it was a gift that I got. My parents taught me there is more than rice: I knew we were a bit different and that there are different kinds of people in the world, and that’s nice. We should listen to each other and celebrate our differences.

That’s what I like about ING, too: that different kinds of people come together. It’s a great chance to learn about different approaches to problems and develop ideas together. The whole working atmosphere gets another spark.

Your whole self is welcome here

This article is part of a series in which ING colleagues tell their personal stories. At ING we celebrate inclusion and value a diverse workforce, as we know people are most motivated when they are free to be their whole selves.