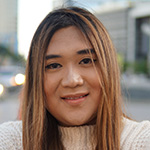 Accepted as I am - Kenneth ‘Kendra’ Surbano is team lead of the Customer Domain unit at ING’s shared services centre in the Philippines. Kendra doesn’t identify as traditionally male or female, saying instead she’s ‘gender fluid’.

Most people assume I’m transgender, but I’m not sure I identify completely with that. I prefer being called ‘she’ and ‘her’, I date guys, wear make-up and have long hair. But I don’t really wear dresses and I don’t want any operations. The spectrum is so broad and I don’t know yet how I want to identify myself. That’s why I say I’m gender fluid. Or sometimes I say I’m androgynous.

There was no big coming out for me. My family always knew me as feminine and flamboyant. I grew up in a household with two cousins who are also gay. It helped me accept who I am. I’ve always known I was different. Since I was four or five years old, I was always with the girls. I didn’t really interact with guys at all, I preferred being with my girlfriends.

There are many people like me in the Philippines and there’s a fairly tolerant attitude towards us, especially in highly urbanised cities like Manila. But there is still a stigma attached. I’ve always worked extra hard to prove I can earn people’s respect. I want to show that we can do more than just work in a bar or in the entertainment industry.

Growing up, I was very focused on studying and passing my board exam. I went to a parochial Catholic high school. Here, the biggest issue wasn’t my sexuality but that I had to cut my hair in a very short military style. It was only after college that I blossomed. I felt liberated when I no longer had to wear a uniform or conform to the haircut. I haven’t cut my hair since graduating in 2010.

Knowing ING is a Dutch bank, I was optimistic when I applied that I would be accepted for who I am. ING surpassed my expectations. My sexuality and the way I dress didn’t even come up during the interview. I have gained so much confidence here and have been given so many opportunities, irrespective of what I am, how I look, or the colour lipstick I wear. After a year, I was already training people and leading a team. Although my team is mostly heterosexual, I don’t feel any discrimination. They are engaged and I’ve earned their respect.

Within six months of joining ING, I helped to set up GALA in the Philippines, our network for lesbian, gay, bi and trans (LGBT+) people in the shared service centre in Manila. I’m on the steering committee. I was the first of my kind here. Now we are three transwomen. I interviewed one of them. She told me afterwards she was so relieved that I did. She was a new graduate and hadn’t known what to expect. Seeing me gave her confidence to know she would be accepted at ING.