Skip to content
CareersDiversity and inclusion Laurine Bohoussou | I fast every Monday and colleagues want to know why
17 June 2019 ... min. read Listen
Listen

I fast every Monday and colleagues want to know why 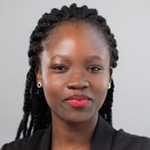 Cultural crossover - Laurine Bohoussou is a Wholesale Banking trainee currently working in the Infrastructure sector at ING in Belgium. She’s originally from Ivory Coast and a practicing Christian.

In my team, they call me the ‘international one’ because I’ve moved around so much. I’m from Ivory Coast, in West Africa. Before Belgium, I was in Canada for six years. I finished high school in Ottawa and studied in Montreal. But it was too cold there, so I moved to the south of France, to Nice, to do my master’s. I’ve also lived in Tunisia and Singapore.

We changed countries every few years for my father’s work. He’s with the African Development Bank. It finances projects in Africa for roads, bridges, schools, energy and technology. I had the opportunity to meet some of his clients and see the kinds of projects they finance. What they do is tangible. You can physically see the roads being built and how it impacts people’s lives and the economy, not least because it enables job creation. This inspired me to go in the same direction. I thought if I work in a bank I want to do something that will have real benefit for people and for the economy.


I moved to Belgium in September last year, when I was given the opportunity to join ING’s International Talent Programme as a trainee. I was surprised by how many women there are in top positions in Wholesale Banking. When I was studying, ING was well-recognised for its structured financing (now organised in sectors), so coming here and seeing it was a woman (Isabel Frits) who had built the team and set up that expertise, was amazing. She’s been a real role model. I’ve also been inspired by Nathalie Bertrand, who is the head of the Energy team where I worked in my previous rotation.

I thought it would be difficult as a woman, but everyone was very keen to help me and involve me in projects. By the end of the rotation, I was being given more work and more responsibility. We are 11 women in my trainee group (over 22 trainees), of which four are in Wholesale Banking. A few years ago, one of my colleagues was the only woman in her group, so I think things are improving.

I’m Christian and what stands out for me is how tolerant my colleagues are of my religion. They’re interested to know more about my faith and how it impacts my life. For example, I fast every Monday and people want to know why. My colleagues support me in this and take it into account when they plan lunch meetings, for example. One even joined me in giving up meat for Lent [the 40 days before Easter, Ed.].

I appreciate being in a team that’s so diverse and yet so interested in finding out more about each other’s cultures and backgrounds. We are different in many points of view yet also accepting of each other. I value working in an environment where people accept who you are and your way of living.