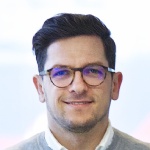 Retail Banking Trainee Bob has been a Retail Banking trainee since April 2017 and is now working in his first permanent role as part of the traineeship.

Over the summer we completed much of the foundation for our platform (including product and price propositions for our customers). The work is progressing nicely, but we’re always on the lookout for ways to do things even more efficiently – such as by reorganising the teams. At the start of the project we set up three teams: one for pricing and billing, one for infrastructure, and one (my team) for the product catalogue. That was a logical approach back then, but the teams are now struggling to work end-to-end – which is essential in the agile way of working – so we’re keen to improve that.

As product owner in one of the teams, I’m closely involved in the plans for the new approach. I’ve noticed that there’s too much interdependency between the teams nowadays, which means we sometimes hold each other back. And from the point of view of our agile principles, the teams have also grown too big. Reorganising into smaller teams will enable us to work end-to-end again, making us faster and more flexible... more agile, in other words.

There’s also room for improvement in terms of sharing knowledge within our teams. This is essential, because we can’t afford to be too dependent on just a handful of people with the right knowledge – it creates huge pressure in holiday periods or at peak times. We’re tackling this by forming ‘chapters’ where we share knowledge and help one another to improve and expand certain skills.

If you’d asked me a year ago, I never would have expected to find organisational management and team performance so interesting. In the past, I’ve mainly been focused on the actual hands-on part of our assignment. That’s still hugely important and very interesting, but I’m gradually broadening my development. Strictly speaking, organisational tasks aren’t part of my role as product owner, but I seem to attract them somehow or other! Plus I’m well placed to see what we’re doing as the basis for thinking about how we can do it better. I’m quick to spot any changes in team dynamics or if things are going wrong, and I then try to put it right.

In the longer term I’d really like a role combining hands-on tasks with team leadership. I’ve discussed this with my manager, and we’re working together to explore the logical next steps for me. I believe it’s important to be able to talk about things like that because it reduces the risk of me becoming unhappy in my work – although there’s no question of that right now, by the way; I’ve got a very challenging job with plenty of chances to learn. We’re working on something that will have a big impact and major consequences for the bank, so things are set to get even more interesting!

Bob did a bachelor’s degree in engineering, a master’s in architectural engineering and then a master’s in innovation management, all at TU Eindhoven. He lives in Eindhoven with his girlfriend and commutes to and from Amsterdam every day. After attending an ING golf event, he has recently started playing golf with a couple of friends from university as an ideal way of catching up with one another regularly while also getting some fresh air.