Skip to content
TraineeshipsTraineeblogIT Trainee Eva | Routine? No thanks! 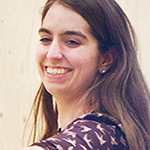 IT Trainee Eva Eva van Weel has been an IT trainee at ING since October 2016. She shares her latest experiences here every few weeks.

I’ve learned a lot, done and seen a huge amount of different things and I’m more than happy here.

I started my traineeship at ING back in October 2016, which means that I’m now in my fourth and final year of being a trainee – and what an amazing few years it has been! I never imagined that I’d get to see so many different areas of the bank. In fact, I never imagined myself joining a bank as a trainee at all. For my master’s in artificial intelligence, I conducted research with Parkinson patients for my dissertation. I toyed with the idea of starting my own company, but I also wondered whether I’d be happier at a start-up, or if maybe a bigger company would enable me to learn more. After my first meeting with ING, my mind was made up: a bigger company was right for me!

My first role was within ING Labs, which is the bank’s innovation hub. Then I worked in Madrid in a team of data scientists for Retail Banking. When I came back to the Netherlands, I spent quite a while in Wholesale Banking, but I’m now doing something very different: IT for IT, in information architecture. Each switch has been to a completely different domain, with different jargon and working with different data… so it’s definitely never boring. That suits me down to the ground because I’m interested in so many different things. For example, at secondary school I was on a double-science track but I also did six languages. Routine? No thanks, that’s not for me! I need variation and new things to get my teeth into.

In terms of highlights, my time in Spain is at the top of the list. I had such a great time there; I felt right at home. I had a strong connection with the country and the people, and I’d always wanted to learn the language. I’ve recently started speaking Spanish regularly again, with Pablo, the Spanish trainee in our team. Another highlight was when my team won the Innovation Bootcamp in my first year. I flew in from Spain for the pitch. Our idea, related to Banking of Things, has since been further developed by part of that team and they’ve achieved considerable growth. Two of my other favourite memories are linked to presenting to a sizable audience. During an INSPIRE session for newer trainees, I had the honour of holding a presentation during the first week. That’s the ‘banking’ week which normally only features presentations by senior management, so that was a very special experience. And another unforgettable moment was my most recent talk, which I did together with Bianca at ING’s Building Block Conference in Bucharest.

But it hasn’t all been plain sailing, of course. On several occasions, the plug was pulled on the project I was working on, and I’ve seen trainees drop out – including people that I felt close to right from the start. And to be honest, the fact that the IT trainees in my intake year still had to do the chartered financial analyst (CFA) exam was a big disappointment. This has since been scrapped for IT and a few other tracks.

But above all, I’ve learned a lot, done and seen a huge amount of different things and I’m more than happy here. I’ve also discovered that I enjoy coaching and mentoring others. People find it easy to ask me for advice, and I like helping them to think of solutions and guiding them in the right direction. I definitely want to do more of that in the future, especially in combination with a technical hands-on role. So maybe I’ll be a Chapter Lead in a couple of years’ time. Who knows? As long as I continue to find it challenging!

Eva did a bachelor’s and a master’s in artificial intelligence at the University of Amsterdam (UvA). She lives with her boyfriend. Eva comes from an entrepreneurial family, has been a keen horse rider since the age of seven and is currently a member of a ‘carousel group’ (“like synchronised swimming for horse dressage”), among other things. She has been involved in the scout movement for as long as she can remember. Every Saturday morning, she tries to keep a group of excitable cub scouts under control.

IT Trainee Eva | From training to workshop to presentation

IT Trainee Eva | Standing room only at the PyData conference

IT Trainee Eva A carefully considered decision to end our project

IT Trainee Eva Our first working model – a milestone!

IT Trainee Eva A hackathon beyond banking

IT Trainee Eva Looking back on Connect

IT Trainee Eva Finally got started with data science!

IT Trainee Eva The excitement of the first major demo