Skip to content
TraineeshipsTraineeblogIT Trainee Wouter | See you around! 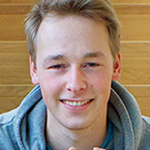 IT Trainee Wouter Wouter Ligtenberg started as an IT trainee in April 2017. Every few weeks he blogs about his experiences during his traineeship.

I’ve been sharing my experiences as a IT trainee with you for almost two years, and I’ve thoroughly enjoyed it. However, I have been working in my permanent role in Manila for a while now, so the time has come to hand over the baton to someone else.

Two years ago, I never imagined that I would end up here. If someone had told me ‘You’ll be working for ING in a long-term role based in the Philippines’, I’d probably have said they were crazy. Before opting for ING, I’d run my own company, I had an offer to do a PhD and an innovative start-up was keen for me to join them. The world was my oyster, and that included the world of ING. But did I really have the patience to work for the same company for a whole two years? Not only that, but for a big company that was bound to entail bureaucracy and office politics, and where things wouldn’t move as quickly as I wanted? In hindsight, it turned out to be the best decision I’ve ever made. I’ve learned so much over the past two years – not only in the field of engineering, but also as a person. The biggest transformation has been learning to be more patient. I no longer expect to see results within a day, I take a calmer approach to other people and I’ve stopped worrying so much about things that are beyond my control. I’ve had plenty of issues to deal with; I sometimes still struggle to adjust to moving from such an open working environment in the Netherlands to the closed and more hierarchical culture in Asia, but what a fantastic adventure it is. I feel extremely fortunate, especially when I see what many of my recently graduated friends are doing nowadays. It speaks volumes that several of them have asked me whether I could help them get a nice job at ING. After all, I’m doing some really cool things. Out of my whole university class, just two of us are currently working abroad – even though that was what almost everyone wanted to do. I’ve pulled it off, although it wasn’t without its challenges at first. I could have taken the easy route, but I’m so pleased that I didn’t.

The only thing I miss sometimes is being my own boss. It’s true that I had to keep myself motivated when I was running my own game development company, but I could call all the shots myself too. The idea of going it alone again has crossed my mind occasionally, but ING always comes out on top. My work is so interesting that it fills me with energy. I no longer have particularly strong ties to the trainee programme, but that’s mainly because I’m so far away here so I miss out on the meetings, lunches and networking sessions with other trainees. It’s also because I’m in my first permanent role. It’s much more hectic in the first year of the traineeship, when you do your two rotations.

I like how things are now. I feel right at home here in Manila and I’m becoming more certain of how I want to shape my career path (because when I started on the traineeship I had absolutely no idea!). Now that I’ve seen all kinds of domains of the bank and have a better understanding of finance and the corporate world, I have a clearer picture of my future. One thing’s for sure: I’ll stay abroad for as long as possible, because I love it.

Thanks for reading my blogs and for all the positive feedback. From now on, I hope you enjoy reading the blogs by the new IT trainees, Claudio and Nikki. And maybe I’ll see you at ING one day!

Wouter launched his own game development company while studying for his bachelor’s and developed the game called Sky Prison. It grew into a serious business which he sold in mid-2016 to allow him to focus on a career in employment. However, he’s keeping his entrepreneurial options open for the future. In his free time, Wouter is very active in the world of sport climbing. He has been a climber himself for the past 14 years, is also on the website committee of the Dutch Climbing Association plus he is a board member of a climbing club as well as being involved in four other clubs. He organises stunts involving zip wires or abseiling from the top of high buildings. He holds almost every conceivable instructor certificate and is now studying to become a trainer of other climbing instructors. He travels abroad as often as possible to climb.

IT Trainee Wouter | ‘Offshoring’ from Manila to Amsterdam

IT Trainee Wouter In the IT review group

IT Trainee Wouter Back in Manila

IT Trainee Wouter A summer break in Amsterdam

IT Trainee Wouter Pros and cons of working abroad

IT Trainee Wouter From Berlin to Manila

IT Trainee Wouter Greenbelt training and learning while climbing

IT Trainee Wouter Too good a chance to miss